The Tummy Tuck With a Difference

Callan Emery spoke to Dr Mohan Rangaswamy, a specialist plastic surgeon at Welcare Hospital, Dubai, about a procedure called lipoabdominoplasty. Although he has been using this procedure since 1995, it is only now gaining recognition. It has several benefits over traditional abdominoplasty.

Callan Emery: Can you tell me briefly about the background of lipoabdominoplasty and how does this differ from classical tummytuck? Dr Mohan

Rangaswamy: At Welcare we do the full range of plastic surgery. One of the surgeries we do quite often is correction of the abdominal deformities by abdominoplasty [popularly called tummy tuck]. I do it by a modified technique incorporating several innovations and we call this lipoabdominoplasty. It differs from classical tummy tuck in several ways. In a classical tummy tuck a long incision is made low down in the abdomen just above the pubis and all the tissues of the abdomen superficial to the muscles are elevated up to the margin of rib-cage. During this process of lifting, the umbilical (naval) is an obstacle.

A cut has to be made around the naval so it can stay in place attached to the muscles while the rest of the tissues are lifted. The abdominal muscles above and below the umbilicus are then tightened if necessary. This provides a firmer abdominal wall and narrows the waistline. The skin flap is then pulled down, the excess loose skin and fat is trimmed off and the flap is then stitched up at the incision line. The naval which has been buried inside is brought out through a circular incision at the correct location. This operation unfortunately has a high incidence of complications like serum collections and non-survival of part of the skin flap especially in smokers.

Since the advent of liposuction several surgeons have tried to incorporate the benefits into the classical model of abdominoplasty and this initially gave adverse results. Surgical dictums of danger zones and “no go zones” were described and liposuction got only a limited role in abdominoplasty.

More recently, fundamental changes have been made to the technique of flap lifting itself. In other words the abdominoplasty itself must be done in a different way so that the two can be combined more safely. More and more surgeons are learning and adopting the procedure.

CE: Is this procedure suitable for overweight people?

MR: I must emphasise here that it is always better to lose weight before any form of surgery and lipoabdominoplasty is not a cure for obesity. However, many patients who have localised obesity in the abdomen and who used to be rejected for the classical tummy tuck can be corrected very well with lipoabdominoplasty and that too with low complication rate. In the classical model, the operation still left the excess fat on the flap and this had to be suctioned out six months later by liposuction.

This might leave them with more loose skin and the tightness that is produced in the first surgery may be lost. If the reverse sequence is done, that is liposuction first and abdominoplasty after a few months, the surgical dissection became very difficult and bloody due to the fibrosis. Hence, patients used to be advised to lose maximum weight before they “earned” the tummytuck. This is no longer a problem with lipoabdominoplasty.

CE: What other recommendations do you have?

MR: It is also recommended that patients should not have a tummy tuck if they plan to become pregnant in the future as this could result in loosening of the skin and stretching of the abdominal muscles, potentially undoing the results of abdominoplasty.

CE: Tell me about the procedure you use?

MR: So what I do here is a combination of liposuction and tummy tuck, all in one operation. In lipoabdominoplasty, as I do it, surgery routinely starts with a full abdominal liposuction. This loosens up the skin. Following this the skin cut is made as usual but the flap is not elevated all the way. It is raised up to the navel and after going around it, limited dissection is done in the upper abdomen.

Lymphatics and most nerves and vessels are preserved. The skin flap in fact becomes very flexible due to the liposuction and slides down easily. If needed the abdominal muscles are tightened at the midline. The excess skin can easily be removed and the abdomen can be closed. Finally the navel is relocated.

CE: What are the benefits?

I do not need to use a drain and patients can leave the hospital on the same or the following day. Pain is also not a big problem due to liberal use of local anaesthetic in the tissue planes. So this procedure enables a reduction in morbidity and an early discharge thereby reducing cost.

CE: How long do they need to recover?

MR: They need about a week to recover.

CE: What sort of side-effects can they expect?

MR: There will be bruising for about a week and there will also be some swelling. The main incision takes about a week to 10 days to heal. If there has been tightening of the abdominal muscles then the patient is not allowed to lift anything heavy for two to three months. If there has not been any muscle repair then they can do most activities after three weeks. 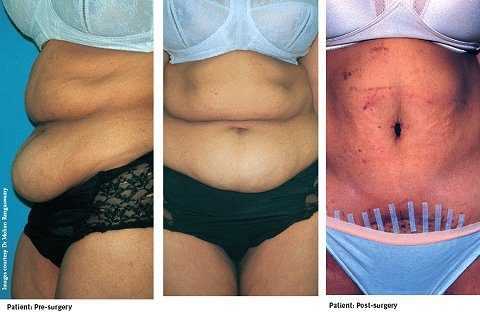 CE: How well known is this procedure?

MR: Surgeons from Brazil [Saldanha et al], France [JF Pascal, Le Louran and others] and other countries have talked and written about it since the early 1990s. I have been doing this procedure since 1995. Recently I made a presentation on this topic at an international meeting in Dubai.

CE: Can you tell me briefly about the patients you see. Do they come for health reasons or for cosmetic surgery?

MR: Patients may come for this procedure for aesthetic or functional or psychological reasons. The aesthetic group are people who are not obese, are reasonable with their diet, they’re fit, but due to childbirth or for some other reason they develop this looseness of tissues in the lower abdomen which they are unable to get rid of.

It is pertinent to point out that exercise does not affect the skin tone, the elasticity of the skin. So if you have loose skin, exercise will not correct it. The only way you can get rid of it is by a plastic surgery procedure. However, I do also see patients who come for treatment for health reasons. This group generally are women, with large ‘hanging aprons’ which creates a functional problem. It affects their mobility, their normal day-today living activities, sexual activities and puts strain on their back. Occasionally even men come with such “aprons” of skin and fat.

There are also the adverse psychological effects of an abdominal deformity such as low self-esteem. A younger patient with a loose abdomen gets a matronly appearance, so people tend to overestimate their age.

CE: Can you perform lipoabdominoplasty with other liposuction procedures in the same operation?